Tariffs on Mexico are an Illegal Ransom 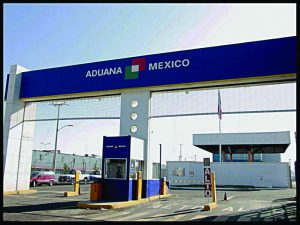 It seems that not a week goes by without some alarming action by the Trump White House that goes against all acceptable political and government norms.

Last week, Donald Trump announced that he would impose trade tariffs on all imports from Mexico until that country stopped all “illegal migrants”, of course without explaining what that means or how he would impose such new taxes on import. Trump threatened tariff rates starting at 5% on June 10, and increasing 5% each month starting on July 1, up to maximum of 25%.

Before we even start debating the merits of trade tariffs, we must first ask why tariffs would be used to as leverage in the on-going debate about immigration.

Clearly Donald Trump is frustrated that he hasn’t been able to manage the immigration problems at the border in his more than two years in office. In fact, illegal immigration and the flood of asylum seeking refugees have increased in the past two years, not decreased.

Trump’s long-promised border wall has been stalled because both Republicans and Democrats have refused to allocate billions of dollars for a wall experts say is not the best approach to stemming the flow across the border.

And despite Trump’s harsh rhetoric and hostility toward immigrants, our strong economy continues to draw workers from other countries, be they documented or not.

Clearly, the number of people attempting to, and actually crossing the border, has increased dramatically. The newest numbers released by Customs and Border Protection this week reflect historically high rates of apprehensions along the border.

But to hold Mexico accountable for the flow is unrealistic and counterproductive to one of Trump’s other goals; approving the new US-Mexico-Canada Agreement (USMCA) which will replace NAFTA and help protect American workers.

Negotiations between the three countries resulted in a better agreement on free trade that could help preserve and even grow some manufacturing jobs in the US, but the agreement must still be approved by Congress before it takes effect.

Trump’s ham-handed attempt to impose trade tariffs on Mexico for the unrelated issue of immigration would be a violation of NAFTA and the new USMCA. In fact, Trump’s punitive tariffs would be contrary to all our international trade deals, going all the way back to the 1934 Reciprocal Trade Agreements Act passed by FDR.

Trade agreements are meant to reduce or eliminate tariffs between countries, and to provide for protections against dumping products, manipulating currencies to influence trade, and other actions that would interfere with the free and fair exchange of goods.

Clearly, arbitrary trade tariffs in retaliation for unrelated immigration issues would be a violation of these trade agreements.

The US must continue to be a responsible and reliable trading partner, especially with our neighbors. Mexico has become our third largest trading partner, behind only Canada (#2) and China (#1).

13.6% of all imports to the US come from Mexico, including cars, electronics, machinery, mineral fuels, furniture, and optical and medical instruments, and food products including meat, processed foods, vegetables, and fruits (most famously, avocados).

Tariffs on these items would cause immediate impacts on American importers of Mexican goods (AKA reduced profits) until they eventually pass on the increased costs to consumers (AKA higher prices). In the end, tariffs on imports are really nothing more than taxes imposed on American companies and consumers.

Countries must be able to rely on our commitment to adhere to trade agreements, to protect companies’ investments in factories on both sides of the border, and so that we can hold other countries accountable if they violate such agreements. If we continue to disregard trade agreements or use tariffs as weapons to achieve other policy objectives, trading partners will begin to do the same, resulting in long-term damage to our economy that is so heavily dependent on imports and exports.

Trump complains that China manipulates its currency and bolsters its domestic companies with protective tariffs, yet now he’s using trade tariffs to impact immigration. This is protectionism, which was once a great enemy of Republicans.

Now, back to the issue of Trump forcing Mexico to “stop” illegal immigration.

For years, tougher enforcement, fencing, and technology have been used to combat illegal immigration along the US-Mexico border, but still, nearly 400,000 people were apprehended along our border in 2018. In 2000, the highest number of apprehensions in history reached 1.64 million. That means that an average of 500,000 people per year were caught in the US after having crossed the border illegally.

If the US can’t control the border on our side, how can we expect that Mexico could on their side?
Trump’s sideshow using tariffs as a threat against Mexico is just the latest attempt to shift blame on to someone else for something he can’t figure out how to do himself. Trump promised during his campaign that he would build the wall (and Mexico would pay for it) and that the wall would be the panacea that would solve all our immigration problems.

Trump even held the federal government hostage last year in the longest shutdown ever to force Congress to fund the wall, and that didn’t work either.

Now, Trump is using trade tariffs to blackmail Mexico into accepting responsibility for immigration problems that we should be dealing with ourselves. It isn’t Mexico’s fault that we are the richest country in the world aligned next to a much poorer and underdeveloped one. The economic gravity of our economy draws workers desperate for a better life, and US employers are willing to hire low paid workers to survive. The unspoken truth is that it’s good for both sides.

Immigration is an issue that must be dealt with in an open and honest policy debate, not threats of tariffs and political rhetoric. Trump has not once offered a real immigration plan that didn’t consist of bans, arrests, and threats, and that could build bipartisan support.

Where’s a plan to deal with guest workers, DACA, and asylum? Where’s the plan to deal with border security using new technology, drones, or other surveillance systems that require less physical construction, manpower, and actually work?

Trump doesn’t want to solve the immigration problems at the border. He just wants to energize his base to get reelected. To him, the end justifies the means. And that’s just plain mean.