A local taxpayer advocacy group won its case and nearly $90,000 in legal fees against the City of San Diego related to the City Attorney’s failed attempt to amend state laws to make it more difficult for the public and media to access public records.

San Diegans for Open Government (SDOG) filed suit in March 2019 after the City failed to produce all documents it requested under the California Public Records Act (CPRA), the state’s version of the Freedom of Information Act (FOIA).

The request sought documents related to San Diego City Attorney Mara Elliott’s participation in the drafting of a proposed state law introduced by California State Senator Ben Hueso to weaken the provisions of the CPRA.

Elliott’s Chief of Staff, Gerry Braun, submitted draft language for the legislation to Hueso’s office in February 2019, and corresponded with Hueso’s staff several times regarding the bill.

Hueso’s bill, SB615, required that anyone alleging an agency failed to provide documents under the CPRA first “meet and confer” with the agency before being able to file a lawsuit to compel the release of the documents, making the process more difficult, time-consuming, and expensive for requesters.

Additionally, the bill required that plaintiffs that sue an agency for failures to disclosure documents must prove the agency improperly, willfully withheld a requested record in order to be awarded its legal fees, raising the standard of proof to a nearly impossible level. Under CPRA lawsuits, plaintiffs are usually awarded their legal fees if the agency is proven to have withheld documents for any reason.

Most CPRA cases are handled by lawyers on a contingency basis, with the recovery of legal fees being awarded not only if the case is won, but also in cases where an agency voluntarily complies with the releases even before a ruling because courts have ruled that the filing of the lawsuit itself spurred or accelerated the disclosure of the documents sought in the case.

Within weeks of the bill’s introduction, Hueso withdrew the language after intense opposition from elected officials, news organizations, good-government groups, and others from throughout the state.

Hueso was running for the San Diego County Board of Supervisors at the time the bill was introduced, but lost that campaign in the November 2020 election, and will be termed out of the Legislature in 2022.

The SDOG case sought documents and emails related to Elliott’s participation in the drafting of the legislation.

After SDOG’s public records request was submitted to both the City of San Diego and Senator Hueso’s office, Braun asked one of Hueso’s staff members to delete an email Braun had sent to Hueso’s office. Braun argued that he had mistakenly sent the email that included information protected as attorney work-product.

The email Braun sought to “clawback” included within it a message from Deputy City Attorney Bill Gersten to Elliott describing proposed amendments to the CPRA to “hopefully preclude all the unnecessary litigation filed by Briggs, et al.” 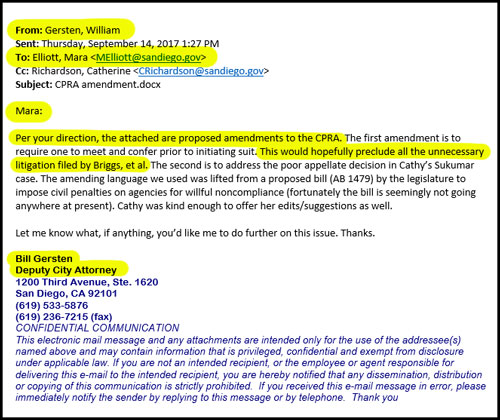 During the discovery phase of the SDOG lawsuit, both Braun and Gersten were deposed by SDOG’s lawyer, Cory Briggs, the same attorney referenced in the email. Briggs had previously represented various groups and individuals in CPRA lawsuits against the City, and at the time of the SDOG case, was also a candidate for City Attorney against Elliott.

After the depositions, the City Attorney’s office asked Briggs to keep the testimony confidential.

When Briggs refused, outside lawyers representing the City Attorney’s office in the case asked Superior Court Judge John Meyer to issue a gag order restricting the release of the testimony.

“The acrimonious history between Mr. Briggs and Mr. Braun and other (city) employees warrants a protective order,” attorneys at the law firm of Colantuono, Highsmith, and Whatley argued to the Judge. “The risk that (Briggs) will use the discovery process to ridicule, embarrass, or inflict reputational harm on (Braun and Gersten) is a real, concrete worry of the City and its employees.”

But Judge Meyer refused to grant any such gag order.

“There is nothing in the deposition testimony that involves confidential, private, proprietary or sensitive information that needs protection,” Meyer wrote in his decision.

Even after the ruling on the deposition testimony, Briggs did not use any information from the depositions during his campaign. Elliott won the November 6, 2020 election.

SDOG and the City agreed to a stipulated judgement in December, and this week, Meyer issued his award for legal fees in the amount of $89,499.

Meyer defended his decision in awarding legal fees due to the amount of time and work the taxpayer group expended to force the release of all requested documents.

“This lawsuit brought into the open the City Attorney’s Office’s efforts to change the CPRA in a manner that tended to undermine the Sukumar v. City of San Diego decision,” Judge Meyer wrote. “The motion for protective order was also an extraordinary effort by the City to obtain a pre-emptive gag order while the campaign for the City Attorney was ongoing,” the Judge added.

The total amount of the legal fees award was calculated by the Judge as the actual legal fees, known as the lodestar amount, multiplied by 1.2 times to compensate for the risk and time involved in a contingency case.

“In light of the contingent nature of this case, the delay in payment, the importance of the CPRA, and the successful efforts by counsel, plaintiff is entitled to an enhancement of 1.2 of the lodestar amount,” Meyer ruled.

Briggs has represented La Prensa San Diego in cases seeking disclosure of documents from public agencies, including two pending cases against the City of San Diego.