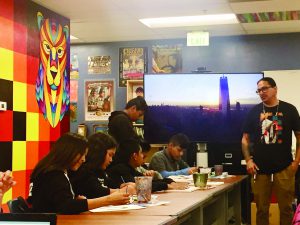 Brown, gold hues stand out in a pencil sketch of Josephine “Josie” Talamantez, a cofounder of Chicano Park who grew up in Logan Heights. It was made by 11-year-old Gabriela Corona who lives in Barrio Logan, which was once a part of Logan Heights.

Talamantez is among those who in 1970 stood tall blocking bulldozers, and successfully helped in the takeover of the land that is now the space of the internationally known Chicano Park.

“I consider her a hero and a leader because she’s been through tough times and kept going,” Corona said, referring to Talamantez.

Since the park’s formation, Talamantez has been one of the community’s most devoted leaders. A public historian, she prepared the application which helped secure the park’s designation as a national historic landmark.

Corona’s classmates Carlos Morales and Pablo Aguilar created paintings instead of sketches, but they also chose to do their art pieces on Talamantez, and each one separately said they found Talamantez to be inspiring.

The student’s artwork is part of an assignment to feature their works at an upcoming art exhibit about community leaders of Chicano Park and the surrounding communities.

It’s the second year of the project, and the idea came from the student’s art teacher Hector Villegas, an artist, muralist, and community leader who, like Talamantez, was born and raised in the community. He gave students from his sixth, seventh, and eighth grades classes the option to choose from several local leaders including Talamantez, Guillermo Aranda, and Rigoberto Reyes, all of whom are still alive. He also took the students on a field trip to Chicano Park. Villegas is also working with another teacher, Jeannette Sherlinee.

Villegas is teaching his students about art, but he also is teaching the students history—
the history of the local communities. He said the idea for the exhibit came in part through a conversation with Rigo Reyes.

“I just started thinking through that conversation that we had, how can we teach the kids about our own history, our local history? We have so much here. A lot of the kids they don’t know it. I’m trying to keep it going through this project,” Villegas said.

Villegas began his own artistic career as an apprentice during the renovation of Chicano Park. “For me, just learning about the park and doing all kinds of community projects, the history of the community became very important to me,” Villegas said.

“I think it’s great,” Talamantez said of what Villegas is doing with his students. “He’s following the example of the park, using the arts to tell history.”

Marc Guerrero, a 12 year old who has been drawing since he was three years old, chose Guillermo “Yermo” Aranda, an artist, painter, and muralist who also helped found Chicano Park, for his piece.

Aranda has painted murals throughout the state of California,including at San Diego State, the Centro Cultural de la Raza in Balboa Park, and several murals at Chicano Park.

“He does art, I like art, he helped save Chicano Park, did the murals,” Guerrero said of his reason for choosing Aranda.

At the forefront of Guerrero’s piece is half of Aranda’s face next to a half face of a jaguar with the Chicano Park kiosk in the background and the words “Nuestra Tierra Sagrada Parque Chicano Aztlan,” or in English, “Our Sacred Land Chicano Park Aztlan.”

Sixth grader Angelique Reyes featured her art project on Rigoberto “Rigo” Reyes. She made a painting and included elements of his life that he discussed while visiting the students for the project. It’s the first painting she has ever made. Reyes,like some of her other classmates, had never heard about Reyes or his involvement in the community. She also had never been to Chicano Park even though she lives in Logan Heights.

Rigo is a lowrider who helped found Amigos Car Club, and he is also an activist who has worked on community projects on both sides of the border. Villegas explained Rigo was also involved during the Chicano Park takeover.

“I liked how he designed his own cars and how he organized the lowriders when they go to Chicano Park,” Reyes said. “He fought for the park and I think that’s inspirational,” she also said.

Next year, Chicano Park will celebrate its 50th anniversary. So far, there are no known requirements to teach the history of the park at local schools. Earlier this month, the San Diego Unified School District voted to make an ethnic studies course a requirement to graduate from high school. Talamantez also points out it takes 10 years to update text books. Villegas notes there is little mention of Latinx leaders in history books.

“If you go to the history books, you’ll see a little paragraph of Cesar Chavez and that’s all we have to kind of identify us and let people know who we are all. We have this little paragraph and it just doesn’t do enough,” Villegas said.

“It’s incumbent on the public to ask for a diverse history,” Talamantez said.

Villegas also explained that learning about foreigners makes it difficult for students to make connections.

“We have over a hundred years of history and culture here that our students can identify with. Logan Heights has rich history,and many women and men have contributed to it,” Villegas said.

“A majority of students don’t realize the struggle to be Mexicano/Chicano, and all the work that has been accomplished to even have a place to call home. Chicano Park and the Barrio Logan Heights is that home, not only for locals, but for people all over the southwest that don’t have a Chicano Park/Barrio Logan Heights,” Villegas said.

The student’s art exhibit is open to the public and the art work will be up for sale on May 2. The exhibit will also include film, music, photography, a performance from the charter school’s Dance Geekz, and food donated from La Central Market and Los Tito’s Taco shop.