Thanksgiving Perfect Time to Reflect on Our Past 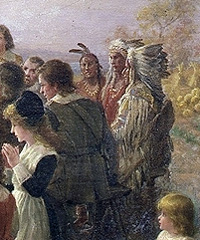 As we gather with family and friends for the traditional feast this week, we should take a moment to reflect on our good fortunes and give thanks for the many blessings we enjoy.

Thanksgiving is a time to celebrate the events of the past year, within our personal lives, as well in the world around us, but what’s the holiday really about?

What is now a national holiday was once just a church service to give thanks for a bountiful harvest started in the earliest colonies of what later became the United States.

The tradition of gathering in the fall to give thanks is older than America itself, but historians disagree on exactly when and where the first such feast was held.

Some argue that Spaniards celebrated a similar dinner in what is now Florida in 1565, or in now-Texas in 1598, or that French explorers did it in now-Florida even earlier in 1564.

But, the Thanksgiving holiday we now celebrate in late November traces its roots to the first permanent settlement in New England; Plymouth.

We all know the story of Pilgrims that landed at Plymouth Rock aboard the Mayflower in what is now Massachusetts back in 1620. We’ve all heard about Pilgrims and Native Americans joining to break bread over turkey and mash potatoes after their first successful harvest.

The problem with that story, however, is that is a whitewashed version of the true story of America’s first Thanksgiving, ignoring both the origins of the Pilgrims and the reality of how they interacted with the peoples that were here for thousands of years before them.

The Pilgrims, as we’ve come to know them, were British citizens belonging to a sect of Puritans that advocated separating from the Church of England. After years of persecution under English laws that required attending church services, the group fled to the Netherlands in hopes of worshipping freely.
As their name suggests, the Pilgrims were, in fact, pilgrims, as in religious followers making a trip for religious purposes.

After about a dozen years in the Netherlands, the group became concerned they would lose their British cultural identity in the Dutch country, and they thought the country was too liberal for their liking.

By 1620, the group was ready to make the voyage across the Atlantic in hopes of religious and cultural freedom in the Colony of Virginia. Under an agreement with the Plymouth Company that would finance the trip in exchange for the Pilgrims sending raw materials back, the group leased a transport ship, the Mayflower, and set out in September 1620.

The group made landfall in what is now New England on November 9, 1620, after 65 days at sea. They searched around for a place to found their new settlement, and in December decided on a location already named Plymouth by an earlier exploration.

This was the start of the Great Puritan Migration that eventually saw more than 21,000 Puritans settle in the new colonies.

Although they had set out to join the existing Colony of Virginia, the group decided to establish their own colony to ensure their freedoms, abandoning the agreement with the Plymouth Company.
The group signed a contract they called the Plymouth Compact that set out their own rules for self-governance, including agreeing to make decisions by majority vote.

The settlers interacted with indigenous tribes, especially the Wampanoag. It was this tribe that would share in the first harvest feast that we now call Thanksgiving. In fact, the Wampanoag tribe taught the Pilgrims to farm corn, squash, and beans and helped the settlers survive the first winter in the colony.

Over time, the tradition of celebrating a fall harvest feast was practiced sporadically, at best, and it wasn’t until the Continental Congress proclaimed a National Day of Thanksgiving in 1777 that the feast took on a nationwide significance.

George Washington later led Congress to proclaim November 28, 1782, as the first annual national Day of Thanksgiving, but each year the President would decide when to celebrate the feast. During the Civil War, Abraham Lincoln proclaimed a national Thanksgiving Day to be celebrated on the 26th, the last Thursday in November, 1863.

Thanksgiving has been celebrated every year since then, and in 1942, a federal law finally established the date to be the fourth Thursday of November. It was President Kennedy in 1962 that made it a national holiday that is now observed by closing schools, banks, and government businesses, not to mention many workers getting the day off work, too.

But, in the rush to get back home on what is now the busiest travel weekend of the year, we may forget the roots of the celebration and its significance in today’s world.

The Pilgrims that we remember fondly were really migrants fleeing hostilities at home and looking for freedom in the new world. They risked their lives in a perilous journey across the sea in hopes of building a better life for themselves and their children. They were seeking sanctuary in another place that would protect them from the religious and economic realities of their homeland. They were, for all intent and purposes, a migrant caravan.

Our country has welcomed such migrants since those days at Plymouth. Thousands of Puritans came for the same reason, and millions of other migrants from every country on Earth have followed. For different reasons but with the same purpose, migrants have come, sometimes with just the shirt on their backs, and made a better life here, making America into the diverse and dynamic country it is today.

We are all immigrants who personally (or our decedents) came here from somewhere else; migrants, immigrants, new comers, asylum seekers, or transplants. History now shows that even the earliest people walked across from Siberia to North America some 15,000 years ago in search of warmer climate
Today, we see caravans of migrants fleeing their homelands making their way to America. Many criticize them for asking for handouts or expecting US citizenship just because they ask for it. Many say they should return to face the realities of life back in their home countries. Many just turn a blind eye.

We should be grateful that we live in a country so rich in resources and opportunities that we and others have been able to make a better life here. We should look at the economic realities of our shrinking domestic population and accept that, without immigration, our country will lose economic strength and therefore its place as the world’s only super power.

China has already eliminated its one-child policy because they realized their country was growing at a decreasing rate. The US is too, and, if not for immigration and higher birth rates among immigrants, we would soon be a country of more elder people than young, a recipe for economic demise.

So, let’s celebrate Thanksgiving for what it really is; a feast thankful for the bounty of our country, and let’s welcome new migrants as the Natives did the Pilgrims. If it makes us feel better, let’s call new immigrants Pilgrims, and offer to help them survive their first winter here.

We will all be better off for it. We already are.