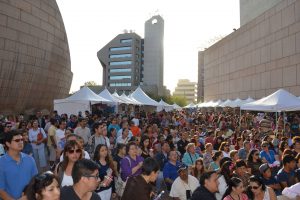 With a new binational emphasis, the 37th Edition of the Tijuana Book Fair will take place from May 17 to 26 in the facilities of the Tijuana Cultural Center (CECUT). On this occasion, organizers are working to integrate literary experts from Southern California, who will actively participate in the event.

“In previous editions, the Fair had organized binational activities in San Diego and Los Angeles, but now the main thing is to invite professional readers,” said Vianett Medina, President of the Civil Association of the Tijuana Book Fair.

In order to do so, the First Conference of Library Professionals is being organized, which will be held on May 21 with members of the Reforma Librarians Network; one of the most important in the United States, who are confirmed to participate. However, the appeal has not been easy.

“Even with the assurance that we will be accompanying them, they feel a bit afraid due to the bad image that Tijuana has, but what we want is to break the ice, that they learn a lot and end up with a different impression,” Medina said.

The invitation consists of participating in the morning activities, a panel discussion on libraries, another on archives and a brief meeting of book clubs, reading rooms and libraries from both sides of the border, so that they get to know and understand each other.

In the afternoon they will be offered cultural tours, with an architectural and social perspective of the city. The first would be in Downtown and the second in the Cacho and Chapultepec neighborhoods.

“The idea is that they get to know the architectural space but also the social, cultural and economic processes that have historically intervened so that the space is constructed and reconstructed in the way that we can currently envision,” said María Eugenia Encinas, coordinator of the cultural tours.

She added, “From that other point of view, envisioning Tijuana as a warm city, with culinary, gastronomic and cultural capital, allows you to see Tijuana as welcoming, and not where something bad could happen.”

On the Facebook page FLT Library Professionals, there can be found the registration form for those who are interested in participating in the binational meeting.

The 37th edition of the Tijuana Book Fair will pay tribute to one of Mexico’s most beloved writers: the poet and prose writer from the state of Nayarit Amado Nervo, on the centennial of his death, with lectures on his career, readings of his poems and specialized discussion tables regarding his life, work and modernism.

The opening ceremony will be on Friday, May 17 at 5 p.m. with a national tribute to the writer, essayist and literary critic Margo Glantz; an indisputable reference in literary studies in Spanish-speaking America, recently recognized with the 2019 Nuevo León Alfonso Reyes Award.

After the opening ceremony, writer Cristina Rivera Garza will present Glantz’s most recent book “Y por mirarlo todo, nada veía” (“And by looking at everything, I saw nothing”), from Sexto Piso publishing house.

The regional tribute will be for Lauro Acevedo; author of the Anthem to the city of Ensenada, played by musician Mario Lamadrid.

In this edition, the Fair will offer a rich literary program, with more than 150 local, national and international authors, among which the journalist and human rights activist Lydia Cacho stands out.

The program includes the participation of Luis Felipe Lomelí, winner of the Gilberto Owen essay prize; Julieta Fierro, astronomer and researcher at the UNAM university, considered today’s most important promoter of science in Mexico; and Ileana Olmedo, winner of the 15th International Narrative Prize awarded by the Autonomous University of Mexico (UAM), the College of Sinaloa and Siglo XXI Editores publishing house, for her most recent novel “Chernobyl”, among others.

In addition, more than one hundred exhibition modules are registered, of which 80 percent will be occupied by local bookstores, as well as publishers with an extensive literary offer, as well as other businesses.

Fifty activities are foreseen for the Extramural Program in alternative venues such as libraries, community centers, public spaces, the Center for Social Reintegration of Tijuana and universities, with the theme of violence prevention.

The artistic program that will be held in the CECUT throughout the Fair includes concerts, dance, music, film and other activities free of charge.

The investment destined for the 37th edition is around 3 million pesos, according to the President of the Civil Association of the Tijuana Book Fair.

Founded in 1980 as an initiative by local bookstores, the Fair aimed to promote reading as a mechanism of development for society and, in this new edition, continues decisively with its goal, growing towards the north with the Hispanic community of San Diego and Los Angeles.