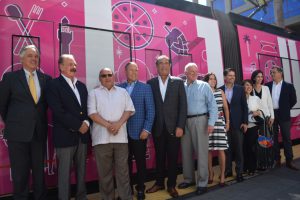 An eye-catching, Mexican pink Trolley car and the Tijuana tourism campaign it promotes were officially unveiled by officials from both sides of the border at a press event this week.

The trolley car, which bears the name “Tijuana” in large, white letters and icons representing attractions south of the border, has been traveling through San Diego since early June along the Blue and Green Trolley lines. The wrap decorating this wagon is part of an effort by Baja California’s Secretary of Tourism to promote tourism to the adjacent Mexican state.

“Not only does (the Trolley ad) tell you all the great things and venues that Tijuana and Baja have to offer, but it is a great way of showing people to get to the border down to Baja California Norte,” said Rob Shupp, Metropolitan Transit System director of marketing. 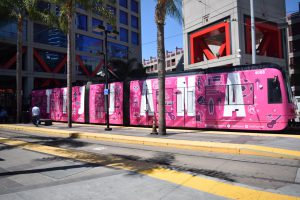 “I could not be happier to have an opportunity to graphically represent the great city of Tijuana and what is happening there to bring more people to our region, to benefit both our economies and keep making this fabulous megaregion grow,” Tersi stated.

“This is how important the relationship between California and baja California is,” Escobedo Carignan pointed out. “Today, the brotherly ties between Baja California and California, and particularly between San Diego and the city of Tijuana, were made clear.”

As part of this advertising campaign, Baja’s Secretary of tourism has paid MTS about $187,000 to promote Tijuana on trolley lines from June through September, San Diego’s most active tourism months. Funds used for this campaign come from a tax on hotel rooms in Baja.