Time is Running Out to Keep the Vaquita Alive 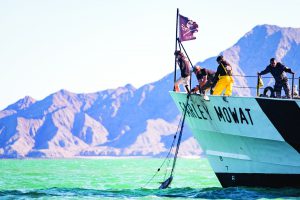 Stakes are high in the fight to keep the most endangered marine mammal alive.

Recent reports have put the number of remaining vaquita, a porpoise endemic to the waters of Mexico’s Gulf of California, at 30 while others report fewer than 15 could be left. As current rescue efforts are becoming more complicated some experts predict its extinction by the end of this year.

The vaquita’s fate is tied in part to an endangered giant fish, the totoaba, whose habitat is roughly in the same waters as the vaquita.

The totoaba’s bladder is in high demand in China’s black market and can sell for up to $10,000.

Erin Dean with the U.S. Fish and Wildlife Service told NPR in 2016, “People in Asian cultures use the swim bladder in a soup called fish maw.” The bladder is also reputed to have some medicinal value — it’s thought to boost fertility despite the claim having no scientific backing.

Captain Paul Watson is the founder of Sea Shepherd Conservation Society, a non-profit marine conservation organization whose mission is to end the destruction of habitat and slaughter of wildlife in the world’s oceans. Watson and his group have a partnership with Mexico’s Navy is to patrol, find and remove illegal fishing nets, and to report poaching activity.

Watson explained the impact of the black market on his efforts to save the vaquita. “We have had threats from the cartels. We just ignore them. But we have been threatened. But we’re not going to be deterred by that. I mean our job is to keep the vaquita from going extinct.”

Lorenzo Rojas Bracho, head of marine mammal conservation and research for the National Institute of Ecology and Climate Change in Mexico, has spoken with media about the subject.

“You have mafias or organized crime moving this product from Mexico to China, entering the black market,” he said to CBS News. “You have authorities, bribes and all the ingredients of this kind of mass disease.”

In an interview with the publication Quartz in 2015, Bracho called the totoaba’s swim bladder market the “cocaine of the sea.”

The illegal fishermen illegally use large gill nets banned under President Peña Nieto to catch totoaba, and these nets also ensnare vaquitas and end up killing both species, which is a violation of both Mexican and International law.

The LA Times reported the case against the U.S. Department of Commerce was brought by three conservation groups, the Natural Resources Defense Council, the Center for Biological Diversity and the Animal Welfare Institute, which argued it was the U.S. government’s duty to enact the ban under the Marine Mammal Protection Act, which mandates protection for domestic and foreign marine mammals.

“For 20 years, the Mexican government has promised to save the vaquita but failed to take meaningful action. That has to change or we’ll lose these animals forever,” said Sarah Uhlemann, international program director at the Center for Biological Diversity. “With vaquitas on the brink of extinction, these economic sanctions are painful but necessary to push Mexican officials to finally protect these little porpoises.”

Captain Watson with Sea Shepherd said he does not support the ban. Watson also explained, “there’s a big difference between poachers and Mexican fisherman.”

“It’s not going to do anything. It’s hurting the legal fisherman and turning them against us. It puts our crews’ lives in danger because it creates hostility amongst the fisherman and towards us because we’re the only people down there visible, so we’re the target.”

Watson said in his view he didn’t see what more the Mexican government could do that they are not already doing.

“If you boycott Mexican shrimp, then you’re going to create more poverty, which is going to make poaching of the vaquita and totoaba more attractive.”

Humberto Becerra Batista, head of Mexico’s National Fishing Industry Chamber, told the newspaper El Universal last month that as many as 820,000 jobs could be lost in Mexico if the fishing ban goes into effect.

The Hill reported that according to data compiled by the National Marine Fisheries Service, the U.S. imported more than $55 million worth of seafood from Mexico in 2017. More than 90 percent of the seafood eaten in the U.S. is imported.

Watson was recently aboard one of Sea Shepherd’s ships in San Diego, the M/V Farley Mowat, which recently returned from Mexico’s upper Gulf of California after removing illegal fishing gear off the coast to help save the vaquita and other marine life. He explained saving the vaquita is just one part of Sea Shepherd’s work on the ocean adding there are 200 volunteers around the world working on a number of efforts to save marine life.

“I think the greatest threat to the survival of humanity is the diminishment of biodiversity in the ocean. If the ocean dies, we die. We don’t live with a dead ocean. Since 1950 we had a 40 percent diminishment of phytoplankton populations, which provide 70 percent of the oxygen we breathe, so if phytoplankton goes extinct, we all die,” Watson warned.

Captain Watson also said radical changes are needed to save the ocean, including banning heavy gear used in industrialized fishing. “There’s nothing wrong with artisanal fishing which is local fishermen, but giant boats that go with giant trawler nets are taking everything,” Watson added.

“Right now, there are 10 million fishing boats out there in the ocean. A lot of them are very destructive operations. Forty percent of the fish that are caught are caught illegally by illegal activities,” Watson said.