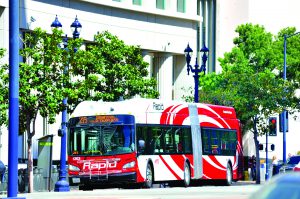 It’s hard to believe, but it is true, workers in San Diego spend an incredible amount of time getting to work.

For Luis Robledesco, it takes two and half hours to get to his job and another two and a half hours to get home. His journey begins early in the dark before the sun rises, crossing the border from Tijuana to San Ysidro where he boards the trolley and then transfers to a bus to head out to east Chula Vista.

Robledesco says he doesn’t even want to talk about what he goes through to get from his house in Tijuana to the border. It’s a journey he’s done for the past ten years. Robledesco said he’s always been on time with a few exceptions when the trolley broke down.

“You can’t do anything, just wait until it moves or they stop at the nearest trolley station let everybody off and wait for another one,” Robledesco said.

For Ana Jimenez, a single mother of two children, it’s a somewhat similar experience. It can take Jimenez two hours or more to get to her job at a restaurant in La Jolla from Linda Vista.

Jimenez said in the past on the weekends when buses run less often, she has been stranded after missing the last bus for the night, and this can happen when she is very tired after working eight hours plus overtime.

“Those are the worst times because I have to call distant relatives late at night, wake them up and hope they will come pick me up. I also don’t like it because my kids are left alone for so long,” Jimenez said.

Jimenez said even though she earns a little over minimum wage, with all her bills saving for a car is still impossible.

Jimenez and Robledesco form part of a statistic which says 70 percent of jobs are unreachable by public transit within 90 minutes in the MTS service area, according to an analysis from the Brookings Institution of data from 371 transit providers in the nation’s 100 largest metropolitan areas.

The long commutes are on the minds of several community organizations looking to push for a 2020 MTS ballot measure where transportation equity is at the forefront.

The Environmental Health Coalition, the City Heights Community Development Corporation, the Center on Policy Initiatives, Mid-City Community Advocacy Network, and San Diego 350 are listed as supporters of a ballot measure on a fact sheet which states the coalition envisions an initiative which would improve connecting people to jobs, make the price to ride affordable, and ensure the region meets its climate goals among other objectives.

The Environmental Health Coalition says residents from low income communities are at higher risk of disease due to transportation-related air pollution emissions.

The fact sheet from the Environmental Health Coalition says 66 percent of transit riders are low income, and in the City of San Diego, low income families are three times more dependent on transit compared to other residents in the City overall.

Lydia Guzman, another San Diego resident, smiles at the thought her commute time could be reduced, but she also said she is already used to her long commute time, traveling two hours in the early morning to La Jolla and two hours in the afternoon to get to her home in City Heights. After all, she’s been doing it for fourteen years.

After spending 30 years relying on buses and the trolley, Maria del Castillo finds it hard to believe her commute time could ever get reduced.

A regular at the Old Town Transit Center, del Castillo sits on a bus bench in between freeway overpasses as cars zoom by, with her blouse covering her mouth while waiting for her bus to take her home.

“I’d be surprised,” del Castillo says about reducing commute times. She wakes up early in the mornings, traveling two hours in the morning and between two and half hours to three hours in the late afternoons to get to her job in Solana Beach and back to her home in Normal Heights.