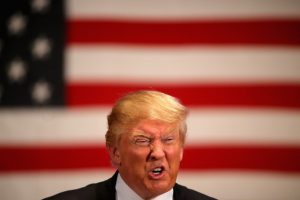 The depth of the lows our national politics have now reached continue to baffle the mind, and would be funny in a comedy, but are tragic in our reality.

This week, after nearly two full years in office, President Donald Trump publicly denied that he’s been working for the Russians.

Unprecedented for a U.S. President.

The denial was eerily reminiscent of the movie plot of the Frank Sinatra movie “The Manchurian Candidate”, where a soldier is brainwashed and programmed by a group of Communists to be an imbedded assassin that could later affect the presidency.

Trump this week was responding to media reports that claim he has gone to “unprecedented lengths” to conceal details of his conversations with Russian President Vladimir Putin, a move many national security experts say is unusual and dangerous, so it raises questions as to Trump’s true motives.

Some national security experts have raised serious concerns that Trump’s actions during and since his campaign for President have been aimed at helping the Russians, either directly or indirectly.

Trump’s unprecedented (yes, the title was a pun) move to shield his private discussions (seven that we know of) even from intelligence agents is damaging on several fronts, experts claim.

First, by concealing the details of the talks from the CIA and other intelligence agencies, Trump denied them the ability to compare what Putin says to his face with intelligence intercepts the CIA may have of Russia’s true intentions, making it impossible to detect if Putin is deceiving Trump.

Our intelligence community gathers valuable information from various sources, human and electronic, and can assess if Putin is trying to manipulate Trump.

Trump, of course, thinks he can’t be manipulated and that he’s actually the manipulator, so he doesn’t see the danger in hiding the talks.

Secret talks between Trump and Putin could also allow them to discuss topics they never want anyone to know about, like how they will deal with Syria, Iran, or North Korea. Putin has much more to gain from appearing to be influential in the political outcomes with those countries, and everything Trump has done publicly with those countries has allowed Russia to appear more engaged and important.

As just one example, Trump’s sudden and seemingly reckless decision to withdraw troops from Syria will allow Russia to help determine the outcome of President Bashar al-Assad, a thug that gassed his own people to stay in power. Putin has already been Bassar al-Assad’s largest supplier of military equipment and ammunition.

Trump’s unusual secrecy also raises concerns that Putin maintains some sort of undue influence over Trump, some form of kompromat or comprising information.

What could that be? Some experts believe Russians may have loaned money to Trump through indirect channels, or that they have evidence of collusion during the campaign that Trump doesn’t want to be revealed.

Keeping the talks secret also helps Putin appear to have more influence over the U.S. President than any other world leader, helping Putin portray an oversized characterization of himself, a move important to him and his reputation at home.

Trump insisted on meeting alone with Putin where only translators were present, also creating a situation where the translators (especially the Russian) could manipulate the communications between the two leaders. No one else was there to correct the impression that each man took away from the meeting.
Under normal circumstances, world leaders include key staff and advisors, even intelligence agents in meetings to gather as much information as possible from the words, manners, and even body language of the opposing side.

During the one-on-one meetings, Trump went in alone but Putin most likely had the upper hand.

Putin is a trained, career intelligence officer from the old KGB days that manipulated his way into an almost Csar-like control over his country. He controls their central bank and has huge influence over the largest companies, usually referred to as oligarchs because they are, in essence, state owned enterprises.

Trump, on the other hand, is a decadent real estate tycoon from the 1980s that turned into a reality TV star that wishes he could be a Csar-like leader of this country. Although he claims to be a successful businessman, recent stories have detailed his enormous inheritance and series of failed deals that raise doubts as to his real world acumen.

Trump has no prior government or foreign policy experience yet he sees himself as equal to or superior to Putin, a well-documented operator on the world stage. To say Trump would be out of his league is an understatement.

Trump’s ego and hubris is dangerous to our country and the world. Putin has been on a mission to become ruler for life, having already served as President then Prime Minister before his current presidential term.

Putin has already put legislation in motion that could result in constitutional changes to allow him to stay in power for a lifetime, much like China’s President Xi recent orchestrated law changes that made him President for life.

Trump may only serve two more years, or up to six if he’s re-elected, but his acquiescence to Putin could shape the course of history for years to come.

Giving any aid and comfort to Putin in his continuing quest for power will come back to haunt the U.S., and our allies in vulnerable areas of the world.

Putin invaded Ukraine and annexed Crimea, yet Trump won’t push back. Putin has threatened Soviet satellite countries, yet Trump questions the continued existence of NATO that was created as a defense to an aggressive Russia.

And on the biggest threat from Putin, direct interference in our elections, Trump still questions whether it was the Russians, and publicly accepts Putin’s denials over the assessment of our own intelligence agencies.

Whether Donald Trump is a witting pawn to chessmaster Putin or he’s been compromised through financial or political gain is unknown, but there aren’t too many other explanations for the huge help Trump gives the communist regime.

If Trump isn’t working for them, he’s not really work for us either. By allowing Russia to gain standing on the world stage, Trump is diminishing the foreign policy work laid since the end of World War II when the U.S. saved Russia.

The Cold War was waged over Russia’s desire for an expanded political role among world superpowers through a build up of nuclear weapons and the coercion of witting partners. After three decades of decline, Putin has put them back at the main table with Trump as his wing man.