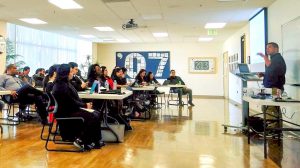 The U.S. Immigration Policy Center (USIPC) is directed by sociologist Tom Wong, who is joined in this endeavor by two inaugural fellows: Ammar Campa-Najjar, a young man of Mexican and Palestinian descent who recently ran for Congress in California; and Vanessa Ceceña, a young woman who is the former director of immigration services at Catholic Charities of San Diego.

Wong served as an advisor to the White House on Asian Americans in the Obama Administration.

As of this week, the Center already boasts nine publications, including some from Wong as well as compilations from major U.S. media outlets.

“From DACA to family separation to the border wall, immigration continues to feature prominently in political and policy debates”, said USIPC Director Tom Wong, adding that the work of the Center will be crucial, as the immigration debate continues to change throughout the U.S.

“This new center promises to make a unique contribution to the national conversation on immigration,” said Thad Kousser, chair of UC San Diego’s Department of Political Science in the Division of Social Sciences. By providing rigorous research in real-time, he shared, it can become a tool for immigration policymakers.

“We’re planning on being a fast as the news cycle,” said Wong.

To that end, the Center will use both academic studies as well as reports from community/public event participants and will also perform surveys and evaluation research.

To cite one example, one of the current publications on the USIPC website is “Deterrence, Displacement, and Death: The Impact of the Border Wall on Undocumented Immigration.”

The study delves into the fact that the wall was built on the idea of deterring immigrants from attempting to come to the United States; however, what actually happened is that the wall merely displaced immigrants towards isolated desert areas where they frequently meet their demise.

Another real-time research – a survey with the immigrant community – produced by the Center and presented by Wong highlights that when local law enforcement officials work with Immigration and Customs Enforcement (ICE, the agency charged with carrying out raids and detentions away from the border), undocumented immigrants are:

60.8 percent less likely to report crimes they witness to the police

42.9 percent less likely to report crimes they are victims of to the police

69.6 percent less likely to use public services that require them to disclose their personal contact information

63.9 percent less likely to do business (e.g., open a bank account, get a loan) that requires them to disclose their personal contact information

68.3 percent less likely to participate in public events where police may be present

34.8 percent less likely to trust that police officers and sheriffs would keep them and their families safe

33.8 percent less likely to trust that police officers and sheriffs would keep their communities safe

28.5 percent less likely to trust that police officers and sheriffs would protect the rights of all people, including undocumented immigrants, equally.