Veterans Come to the Defense of Upside-Down Flag Mural at U.S.-Mexico Border 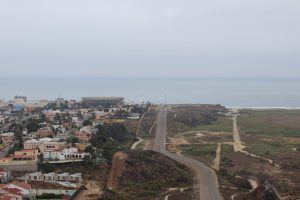 After learning that U.S. Customs and Border Protection is evaluating whether to remove an upside-down flag mural painted on the border fence separating San Diego and Tijuana, a group of veterans has come forward in its defense.

Ralph DeSio, a CBP spokesman, said the agency has received complaints about graffiti on federal property, specifically about a painting on the Mexico-facing side of the border wall with Tijuana across from Friendship Park.

The mural was painted five years ago by American artist and veteran Amos Gregory to bring attention to the issue of U.S. veterans deported from the country they fought to protect. The upside-down flag is known among the military as a dire distress signal, said Gregory.

According to the artist, a deported veterans group in Mexico received a phone call a few weeks ago letting them know that the mural would have to be “changed or removed.”

“It’s said, particularly for us as veterans. We risked our lives for, among other things, freedom of expression,” lamented Gregory, who feels that the message behind the mural is being misinterpreted, when it was meant as a reference to the anguish deported veterans feel and the help they need, but never to be disrespectful to the flag or the country.
DeSio pointed out that there “currently are no plans to remove the mural,” although “it’s important to understand that we are talking about U.S. Government property, and that all these graffiti or paintings were applied without permission.”

“As we started to investigate (the complaints), it became obvious that skilled artists applied some of the ‘graffiti’ with the intent of creating murals to send a specific political message and/or to beautify the border wall,” said DeSio, noting that the sector’s chief agent decided to contact the artists to engage them in conversation before making any final decision.

As soon as the veterans group learned about the possibility of having the mural removed, they sprang into action. An online petition in favor of keeping the mural has already garnered nearly 35,000 signatures.

Gregory and other veterans also went to the site armed with buckets of paint to maintain the mural, which seen from one angle depicts the upside-down flag, and from the opposite angle lists the names of deported soldiers.

Because the mural is located in a rather emblematic location, it is surrounded by many other pieces conveying messages about immigration and human rights. This, according to its advocates, is why they do not understand why this particular mural is the only one being disputed.

Unified U.S. Deported Veterans director Hector Lopez defended the permanence of the mural, agreeing that its message is not offensive or disrespectful.

“If they want us to right the flag, let’s bring us home,” he shared.