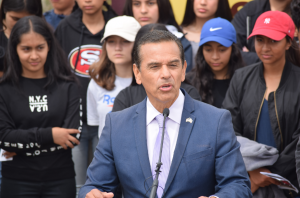 With few days to go until the primary elections, gubernatorial candidate Antonio Villaraigosa once again expressed support for immigrant and refugee families living in the United States during a campaign stop at San Diego’s Border Field State Park this Wednesday.

Specifically, Villaraigosa pointed his rhetoric toward “marking a different path” from the presidential administration by welcoming those who are looking to reach what the candidate called the “California Dream.”

“We’ll stand up for the notion that a great state, a great nation, is one where we welcome anyone who is willing to work and play by the rules and willing to do everything possible to so that their kids can have a better life,” he said.

In his speech, the former mayor of Los Angeles asked Californians to reflect on the separation of refugee and immigrant families at the border, a result of current federal immigration policy and practices by immigration authorities.

“We have to ask ourselves, is this the country where we divide mother from child? Fathers from their children? People who are fleeing persecution and violence?” Villaraigosa asked.

“The answer is that we are not a nation that divides mother from daughter, father from son, families from their parents. We are better than that,” he answered after a short pause.

Villaraigosa also expressed optimism about the potential the U.S.-Mexico border can represent for the State. Roughly half a mile from the current border wall, he stated that he sees the border differently from leadership in Washington.

“Some people, particularly President Trump and a majority in congress, see that border as a dividing line; they see it as a place of conflict, a collision of nations and values,” said the candidate. “I choose to see that border as an opportunity, as a meeting place, where people from two great countries can come together and trade together.”

Villaraigosa expanded on this idea by expressing that a good relationship with Mexico is economically important, as Mexico is a key trading partner for California and states in the southwest.

Villaraigosa was accompanied by Enrique Morones, founder and director of immigrant rights group Border Angels, who spoke highly about about Villaraigosa and his work prior to the candidate’s address. To this, Villaraigosa replied by calling Morones a long-time friend and added that he “couldn’t be prouder to be here with Border Angels.”

This is not the first time Border Angels and Villaraigosa have come together for campaign purposes.

In his early candidacy, Villaraigosa joined the members of the group who travelled to the desert to leave water for migrants making the dangerous journey into the U.S. He was also present at last year’s Border Angels’ anniversary dinner and a community panel co-hosted by the humanitarian nonprofit and La Prensa San Diego.

Plans for a protest put on by Logan Heights-based community and political action group Union Del Barrio are believed to have motivated the move although nothing has made official by the candidate’s team.

After Villaraigosa’s address, Morones said to reporters that the event was actually moved to Border Field to engage with a group of eighth-grade students visiting the border wall from San Jose.

Villaraigosa, currently in third place in polls, is looking to earn the most or second most votes in this Tuesday’s gubernatorial polls. Democrat Gavin Newsom, former mayor of San Francisco and current lieutenant governor, is currently polling in first place with Republican John Cox coming in second.

Under California’s open primary election format, the two candidates with the most votes, regardless of party affiliation, advance to the November general election, which will decide the next State governor.

California’s primary elections will be held on Tuesday, June 5.