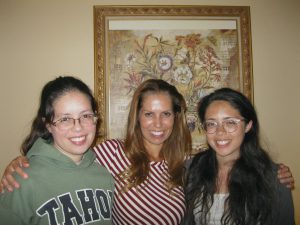 Since immigrating to San Diego from Tijuana, Yolanda Bravo has taken the initiative to succeed in her life, education, and work, with fierce determination.

When Bravo and her two teenage daughters arrived in San Diego in 2013, they spoke little English but knew the importance of having an education.

Determined to make a better life for herself and her daughters, Bravo – a single mother – enrolled her daughters in high school, while she studied English at San Diego Continuing Education West City Center.

Bravo’s teacher, Toni Fernandes, took a special interest in her and encouraged her to continue her education at Mesa College.
Born in Guadalajara and raised in Tijuana, Bravo’s life was different in Mexico from her life in San Diego.

Bravo earned her bachelor’s degree in psychology at the Ibero Americano University. She wanted to pursue a career that allowed her to help low income families and found work in a school with special needs children, where she oversaw 35 employees.

Bravo planned on earning her master’s degree, however, fate intervened and due to unfortunate circumstances, she felt her daughters would have more opportunities in the United States.

Although Bravo had a degree in psychology, she knew she had to “start from scratch” in the U.S., so she enrolled in child development classes as well as ESL classes.

As her English improved, her teachers encouraged her to apply as a teacher’s aide in the continuing education program. In 2016, she was hired as an hourly aide for both the ESL classes and GED in Spanish classes at ECC.

Bravo stood out as an aide as she was very conscientious in her work and took the initiative to go above and beyond what was required. The teachers and administrators took notice and when a full time teacher’s aide position opened up in 2017, she applied and got the job.

In 2017, she began working at CE Mesa in the evening ESL program where she continues to excel at serving both the teachers and the students. Many times, she is the liaison between them. She also likes to help and motivate the students.

Bravo has also put her child development classes to good use as she got a job as an aide for Miller Headstart pre-school in Tierrasanta.

Between both jobs, Bravo works about 50 hours a week.

Like most immigrants who work long hours, Bravo does this, so that her daughters can have a good education and a bright future.
The three live in a small, but cozy one bedroom apartment. Bravo is very proud of her daughters and feels the sacrifice made has been worth it.

Carolina has just graduated with honors from UC San Diego and plans to apply to medical school. Paola will go to Northwestern University in the fall on a full scholarship. She wants to be a mechanical engineer. The two sisters are now fluent in English as is their mother, no small feat after only five years.

Bravo gave up a lot when she moved to San Diego, but one thing that hasn’t changed, however, is Bravo’s desire to be of service to others.

Bravo is always there if teachers or students in the evening program need her help, especially the Latino students. She believes education is growth and continues to take online classes herself. She is preparing to take the citizenship test and would one day like to get her master’s degree in psychology here.

As she says, “I want to show that Mexicans have brains!”