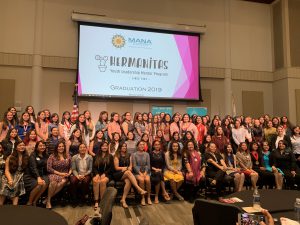 Motivation runs high among Latina mentees and mentors who form a part of the MANA de San Diego’s Hermanitas Youth Leadership Mentor Program, which celebrated its latest graduating class this past week.

With pride, joy, and smiles, more than 60 young women walked across a stage as their friends, family, and supporters cheered their latest advances in their academic pursuits in what marks the 25th anniversary of the mentorship program.

“I’m so proud of our Hermanitas program. We have a hundred percent high school graduation rate, and I think the key is in the confidence that is built during the program. The mentors know that the girls have it in them, they just inspire and guide them to make sure nothing gets in their way of success,” said Sofia Salgado, executive director of MANA de San Diego.

That willingness to push for more is heard strongly in the voices of mentee Karen Mendoza Rodriguez, a senior at Madison High School, and her mentor Nickie Peña, a marketing and public relations expert who recently landed a marketing position with the San Diego Regional Economic Development Corporation.

“It’s been great to watch you grow,” Peña said to Rodriguez as the two waited for the graduation ceremony to start. “We clicked instantly,” Peña said about the time when the two first met, and since the time they both got involved with the program, they both agreed they have learned a lot from each other.

Rodriguez heard about MANA de San Diego’s Hermanitas Youth Leadership Mentor Program through a close friend, and when she was in the seventh grade they both applied and were accepted. Peña recalled she first learned about MANA de San Diego while reading a copy of San Diego Magazine and thought she should get involved with the program. But she also explained the feeling to volunteer came while she was growing up, watching her mother who worked and volunteered at her church.

Before MANA, Rodriguez said she often had questions about her education, college and career, but found herself having trouble finding answers.

“I knew I wanted to go to college. I just didn’t necessarily know how,” Rodriguez said.

Peña said she also experienced similar problems navigating her academic progress before she went to college.

“I had to navigate through the process of A through G requirements. I started at a community college and later figured out it was one step before going to college and then graduate from San Diego State University,” Peña added.

Both are also “first generation college students” meaning they are the first from their families to earn a college degree. When the program first started it was also common to be the first from the family to go to college, and twenty five years later it hasn’t changed for some of the students in the current program or for many students of color in general.

In San Diego, a report by the San Diego Regional Economic Development Corporation found that by 2030 Latinos will make up 40 percent of the region’s population, but currently 34 percent of Latinos do not finish high school. It’s those conditions MANA de San Diego is working to change.

“Our goal is to create cyclical change at MANA, meaning that we start with the Hermanitas in seventh through twelfth grade to make sure they get to college, then offer scholarships for Latinas enrolled in college. Then we offer professional and leadership development through our Latina Success Leadership program and conference. In that way, the Latinas we serve come full circle and become leaders in their community, businesses and MANA!” Salgado said.

Commitment also runs deep among those involved with MANA de San Diego. Salgado has been a member since 1985, joined the staff in 2008, and became its Executive Director in 2016. Many of the original members are also still highly involved,including Nellie Andrade, founder of the San Diego chapter, as well as current Chula Vista Mayor Mary Salas. The organization’s current president Venus Molina, who currently serves as Chief of Staff to San Diego Councilmember Jennifer Campbell, was in the first Hermanitas class, received the MANA scholarship and also graduated from the Latina Success Leadership program.

Mentors who volunteer for the Hermanitas program must also commit to at least one academic year, attend seminars once a month on Saturdays, and communicate with their mentees at least once a week. They’re also encouraged to make time for meeting with mentees outside the scheduled group meetings.

Peña has mentored Rodriguez for the last three years. Her own self-motivation is evident in her own background. In 2011, she became a part of the craft beer industry when, as she said, it was barely exploding, and at one point worked at a marketing agency where she started their public relations efforts.

“One of the things I’m working with Karen on is for her to know her worth and ask for that,” Peña said. She explained those feelings come in part from her own upbringing. “When I was younger my dad always told me whatever you do, just be the best at it,” she said.

Rodriguez, who is 17 years old, already has an impressive record and shows great promise for the future. She said she first remembers wanting to go to college when she was in elementary school. She explained since that time she’s had shifts in her career during elementary and middle school. She learned to play instruments, but later wanted to become a writer. After her quinceañera (her 15th birthday celebration), she was given a camera and it inspired a career in film.

When Rodriguez was 14-years-old, she came out to her parents and told them she was pansexual.

“It was definitely hard, one of the biggest moments of my life. Within the Latino Hispanic community, it’s especially hard because we are traditional, and a lot of us are very religious. It gets complicated,” Rodriguez said.

Her father, Jose Hugo Mendoza, who was also at the Hermanitas graduation was full of emotion when speaking about how proud he is of his daughter.

“More than anything, I am proud of her, very happy, that she has become an independent person, responsible, I see she is confident,” Rodriguez’ father said “I’ve been saving money for her expenses, but she pays for everything herself,” he also said.

Last year her father said he asked her why she didn’t go out more with her friends. He said she responded by asking him if he wanted her to be someone who went out or someone who would focus on her goals and finish her career.

When her father graduated from high school, he recalled no one from his family could be there except for his grandmother.

“I did feel that feeling that I needed my parents, but with my children I always try to be there. For Karen, I try to be supportive because she deserves it. I will be here for her if she needs me with moral support, so she can complete her dreams,” her father said.

Rodriguez has been accepted to San Francisco State University to study cinema. She aspires to become a film director and has also obtained her doctorate.

“I want to lead the pathway into telling more stories that frankly are not told enough, especially in this time. Growing up, I didn’t see myself represented in film. It was disheartening, even now there’s such little representation. I want to be able to lead that small revolution in cinema, tell more stories about minorities, Latina stories, or even from the LGBTQ community. I want to be a part of that for my community,” Rodriguez said.