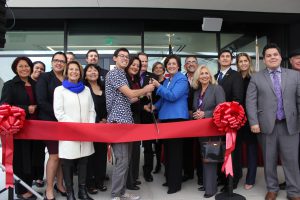 Southwestern College leaders and students dedicated the new Plaza Building at the Higher Education Center in National City on Thursday, Feb. 22, doubling the educational space of the center.

In cutting the ribbon on the $22 million, two-story structure, college and National City officials talked about the partnerships that made the new facility possible.

“There were extensive efforts on the part of National City supporters to ensure that the land for this project was available,” SWC Higher Education Center Dean Christine Perri said.

The new building opened this semester with four new science labs, a medical assisting clinic, a large lecture classroom and a community room, where the event’s reception was held. A plaza and a second-story outdoor terrace that will provide places for students to sit, study and socialize between classes are also part of this project.

Inside the medical assisting clinic, students get the full experience of becoming a medical assistant, including simulated waiting rooms and simulated clinical exercises and practices. On the floor above it, the corner lecture room can hold more than 50 students for large classes, like biology lectures.

“We are also going to provide community health services by appointment on different days of the week,” said Perri to La Prensa San Diego. “We created a waiting room next to the street so people can come in and check their blood pressure, and take other health screenings.” 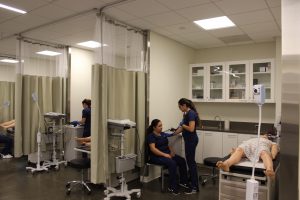 College and City officials called the project transformative for the community.

“Just like construction projects run into obstacles, so do our students,” said Southwestern College Governing Board President Griselda Delgado. “But through education, our students build new lives for themselves and their families.”

“This new building is about giving opportunity to the community,” said National City Mayor Ron Morrison who attended and participated at the ribbon cutting ceremony. “SWC Higher Education Center makes it more affordable and accessible for students.”